I visited this display in February, 2005.  Timed tickets limited exhibit entry every 15 minutes from 9 am to 5 pm. Price was $17, or $19 for the exhibit and IMAX film combo.  Atlanta Journal Constitution article on January 20, 2005: Mobile welcomes Dead Sea Scrolls

The centerpiece of the exhibition was the 12 scroll fragments. All scroll fragments in the Mobile showing of The Dead Sea Scrolls exhibition included legible writing and are of significant size. Some scroll fragments range from pieces no more than an inch square to the largest fragment measuring over 3 feet long. (Photographer is Tsila Sagiv)

Deuteronomy scroll is 17.75" x 3.75". This fragment includes text of the Ten Commandments.

Between 1947 and 1956 thousands of fragment of ancient writings were discovered in caves off the shores of the Dead Sea.  To give you idea of value, on June 1, 1954 a classified ad in the Wall Street journal offers 4 scrolls for sale. They were purchased anonymously by the State of Israel for $250,000.  There are 28 nearly complete scrolls and anther 800 scrolls in over 100,000 (hundred thousand) of fragments.  They were written in ancient Hebrew, Greek, and Aramaic.

In addition to the scroll fragments, the exhibition included more than 80 authentic archaeological artifacts (coins and pottery), explanatory labels that combined text with visual images, maps and charts, a scale model of the Qumran site, audio-visual techniques and interactive displays to tell you how the scrolls were discovered, the life and beliefs of the Qumran community thought to have written the scrolls, and the challenges faced by the international team of scholars who have worked on the fragments for the past 50 years or so. 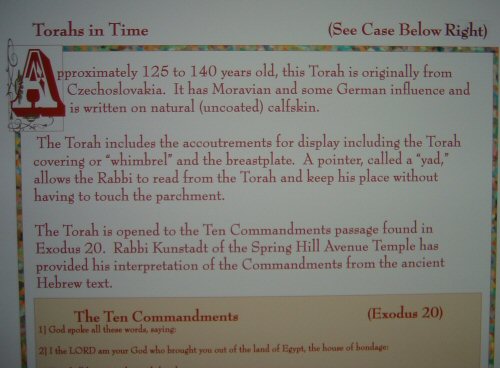 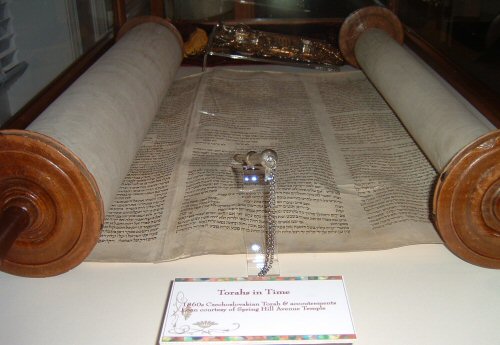 I saw a virtual tour of the Temple Mount and Jerusalem 2000 years ago in the Hearin-Chandler Virtual Journeys Digital Theater in the Exploreum. 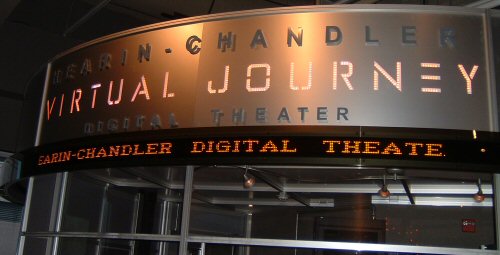 The theater is a cross between a planetarium and a 40-seat theater. It was a very, very cool show.  It was almost as if you were in the city of Jerusalem.

The "tour" featured a virtual reconstruction of King Herods Temple Mount. Virtual Journeys used scientifically accurate digital data banks to fly you back in time to experience the grandeur of the Temple as it stood in Jerusalem prior to its destruction by Roman troops in 70C.E.  We "walked" beneath the massive stone pillars, explored the Royal Stoa and looked up towards the breathtaking ceiling high above. Everything was historically and archaeologically accurate.

50 parallel processors are required to display this Urban Simulation created by the Israel Antiquities Authority.  This tour of Jerusalem was only in Mobile for 4 weeks. The only other virtual theater in the country is in Huntsville.  They will have a 3-D tour of the human body.

I also visited a special exhibit of "Sacred Words: Texts of the Judeo-Christian Tradition" at the Museum of Mobile  www.musemuofmobile.com.

This was a collection of never-before-assembled are and historical "Sacred Words" from private and public sources.

Marianne - Goddess of Liberty (below) 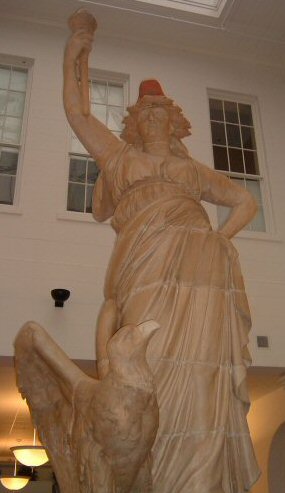 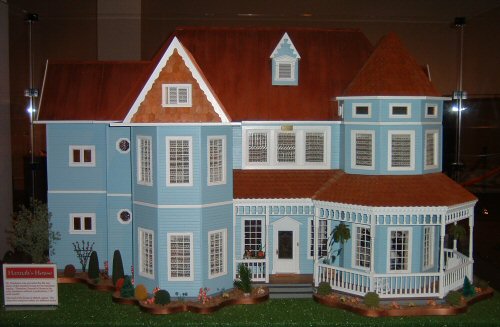 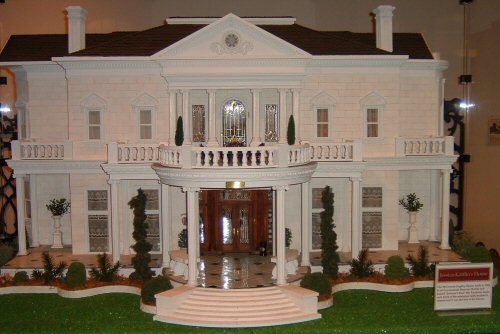 On the way to New Orleans, stopped at the Battleship Memorial Park. The park has 22 combat aircraft. 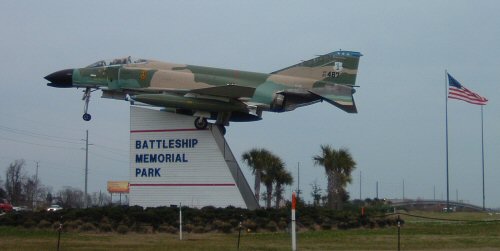 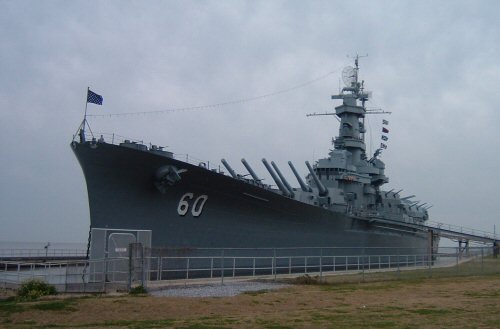 In WWII, the USS Alabama  http://www.ussalabama.com/ had a crew of 2,500.  When I visited there were Boy Scouts all over the ship!  They were spending the night onboard - what an adventure for them to sleep on the battleship.

The submarine USS Drum - you can climb inside! 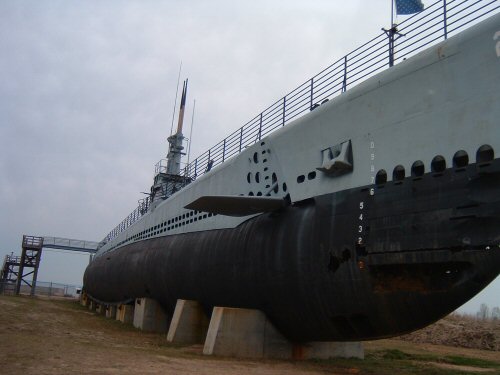 After Mobile, it was on to New Orleans, Louisiana.

Mobile --- Finally, the original Bible comes to the Bible Belt.

Today marks the beginning of a three-month stay for seven of the oldest surviving texts of the Old Testament, in a major exhibit of the Dead Sea Scrolls at the Gulf Coast Exploreum Science Center.

It is the largest exhibit of biblical scrolls ever mounted in the United States and is the first such exhibit to come to the Southeast. Previous exhibitions of the scrolls have drawn as many as 2,200 visitors a day. Mobile boosters, with 12 scroll fragments on display, are bracing for crowds.

The show already has sold 40,000 advance tickets, some of them to church groups from the Atlanta area and the Southeast.

The Houston Museum of Natural Science, which held the exhibit last fall, had expected to attract 100,000 visitors in three months. Attendance topped 165,000. The museum kept its doors open until 4 a.m. the last night of the exhibit to accommodate procrastinators, said project manager Renee Davis.

The Exploreum expects to draw similar numbers, which would almost triple its visitation rate.

"It's a great coup for anyone interested in this," said Phillip Callaway of Stone Mountain, an authority on the scrolls and co-author of "The Complete World of the Dead Sea Scrolls." Callaway is particularly eager to see the five scrolls that never have been outside Israel.

The museum and its sponsors spent about $1 million to stage the exhibit. It provides an evocative retelling of the full story of the scrolls, from their discovery in 1947 by Bedouin shepherds to their translation to their impact as perhaps the most significant archaeological discovery of the 20th century.

Light harms scrolls - The exhibit hall is kept in low light, because light speeds the deterioration of the 2,000-year-old texts. But even bathed in 30 lumens (the equivalent of a nightlight), the scrolls seem to emit their own kind of glow.

The longest and liveliest fragment is from Psalms, a 3-foot section of parchment that has aged to a cream-and-coffee color. "Praise the Lord!" the text reads, and the generous script reflects that exuberance.

A much smaller slip from Deuteronomy contains the earliest known copy of the Ten Commandments. The tiny, crabbed script is almost invisible against the molasses-colored parchment.

"There was spiritual inspiration at the point where the pen hit the papyrus," said Terry Ellis, pastor at Spring Hill Baptist Church near Mobile, who attended a preview of the exhibit Wednesday. "The same spirit that preserved the text for 2,000 years. It was not just another text to copy, it was the word of God."

Of course, the museum will have competition from Mardi Gras celebrations, which begin Friday. (Mardi Gras parades will proceed directly down Water Street, just outside the Exploreum.)

Those who tire of catching beads can retreat to the quiet of another era.

"It's not like we're going to look into the [case] and say, 'Aha! That's what they mean!' " said Milt Hayes, who will travel to the exhibit in February with fellow congregants from Kennesaw's Christ Episcopal Church.

Instead, said Hayes, "it's a nice opportunity to look at some Scripture that's as old as any that there is."

Mobile landed the exhibit by vigorously courting the Israeli hosts after a similar show in Grand Rapids, Mich., in 2003.

"Mobile was chosen because we went after it," said marketing director Eleanor Kulin.

The parchment and papyrus scrolls survived for 2,000 years in the incredibly dry atmosphere of the caves above the Dead Sea. Once they were removed from their clay jars, they began to deteriorate.

Changes in temperature and humidity, particulate matter, sweat, tears, oil from the hands of translators, pollution, chemicals and bacteria all contribute to their disintegration.

"Some of them are completely black," said scroll scholar Jim Strange of the University of South Florida.

Even taking the scrolls out of their dark storage at the Israel Antiquities Authority contributes to their decomposition, but their travel serves an important purpose.

"If we're not letting the public see the scrolls, then what is the point of finding them?" asked Tamar Rabbi-Salhov, a scroll curator with the authority. Traveling exhibits help fulfill the authority's mandate to care for and display the scrolls, she said. Revenue from such exhibits also helps fund restoration efforts.

Rabbi-Salhov is one of a small group of Israelis who accompanied the scroll fragments on their journey from Jerusalem. Two such couriers must be in the presence of the scrolls at all times during the passage.

Atlantans interested in the scrolls can attend a lecture at 7 tonight at the Michael C. Carlos Museum at Emory University. Adolfo Roitman, curator of Israel's Shrine of the Book at the Israel Museum, where the first seven scrolls are displayed, will speak about the scrolls' significance for Judaism and Christianity. Roitman is scholar in residence at Congregation Or Hadash, a conservative Sandy Springs synagogue.

This page and all other pages in the http://www.mytrips.com web site, along with the journals, images, and photos are Copyright © 2021 by Suzanna Travels.  All publication rights are reserved.  Email: web@  mytrips.com  Remove the space after the @